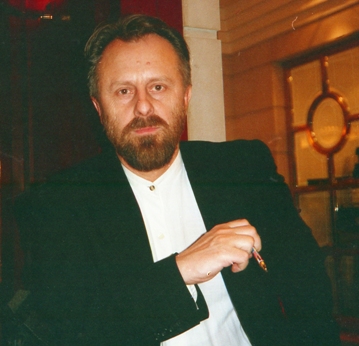 S. Tsarouchas: How did you got involved with AIMEE & JAGUAR?

Jan A.P. Kaczmarek: It is a very interesting story. As usually in life an accident was behind it. One day the film's director Max Faberböck got a CD with my music from one of his friends at a time when he was looking for a composer.

Jan A.P. Kaczmarek: Yes, it was filmmusic. It was a CD with music to a film called BLISS. And he loved it and they contacted me and Max came to Los Angeles and we had a meeting. We immediately understood there's a connection between us. I've seen the picture here in Berlin in a very early stage. It was maybe the second cut, but already I recognized the incredible quality of it. So it was a very easy decision for both of us to get engaged.

S. Tsarouchas: There  are a lot of songs in the film, which I quiet don't understand. Why are so many?

Jan A.P. Kaczmarek: I believe the director was feeling a need for authentic material from that period. So the film seems, sounds more real and in the same time he wanted a score which could create a strong emotional drive behind it and elevate it to necessary emotional levels.

S. Tsarouchas: Where the songs been put in first?

Jan A. P. Kaczmarek: The songs were found first.

S. Tsarouchas: Will there be a CD with your music?

Jan A.P. Kaczmarek:Yes, its already made. Its done by east west records. I haven’t seen it yet, but yes, it exists.

S. Tsarouchas: Do you know what themes are on the CD?

Jan A.P. Kaczmarek: I mean, I produced the CD, so I know, I’m fully aware of what was there. It is a selection of the score from Aimee and Jaguar and its the main body of the CD plus a few songs, which producers felt important to recreate the mood of the movie.

S. Tsarouchas: We talked about the songs just before and sometimes I find it inappropriate or I have a problem with songs on a „soundtrack“-CD. What kind of feeling do you have on songs?

Jan A.P. Kaczmarek: I have mixed feelings, you know. I would prefer score to be separate and I suggested it to the record company, so they would release two separate albums with the score and second with songs. However they went, they did not have enough songs for a separate CD, so they were pressing to combine all those. Well, I have a lot of respect with this movie, so, and because the director also said, he believes that some songs can help to recreate this period of the movie, I agreed to it and because we used just few of them, not so many.

S. Tsarouchas: I found it, their were to much.

Jan A.P. Kaczmarek: Well, songs are always the easy way out, I agree with you and I’m intuitional (??), who says go with unique solutions, find a language which is original and created for this picture but, again there is also some charm in those Cuban songs and the movie was shoot with them actually. They are an integral part of the picture, than some songs were brought in and those stand out , those who came later, were brought to fill certain places, maybe that could have done better, but I don’t have complaints. I’m basically happy with the solution.

S. Tsarouchas: How would you define film music?

Jan A.P. Kaczmarek: Film music is for me predominantly the score, the rest is the songs in the film. Filmmusic is originally written for a particularly picture. I strongly believe that’s how it should be interpreted.

S. Tsarouchas: How different are the working conditions between Europe and the USA?

Jan A.P. Kaczmarek: In general there’s more pressure in the States, the bigger the picture the bigger the pressure to deliver a score which is answer to expectations of the studio, the producers and the director. However, its always depends, actual proportions and the level of freedom for a composer always depends of who is the composer and who are the producers, who is the director and its always changing, always different and if there is a good connection between the director and the composer and if the composer is a person with independent mind and enough talent, there’s always a possibility for a very independent score, because people respect independent thinking, if its based on a solid ground so I always fight for certain solutions and I usually win not because I fight for the fight itself, because I was lucky to work with the people with open minds, so there is a serious argument, but if I deliver serious support for my ideas, than its being accepted and that is a great thing and nothing brings you more satisfaction in Hollywood if you are in a battle and they accept in the end that you are right. That is really a tremendous satisfaction.

S. Tsarouchas: Who is your favorite director?

Jan A.P. Kaczmarek: That is a very dangerous question, because its few of them. Its not a one person. Today my favorite director is Max Faberböck, because („Aimee and Jaguar“) is our newest child and my newest child. This is very emotional. The opening premiere was yesterday, so I have very strong emotions about it. I have a lot of tremendous satisfaction for Agnieska Holland (Regisseurin von Bliss, Washington Square). We have a strong relationship and we are right now working on our third movie with the title „The third miracle“, with a very interesting cast Ed Harris, Anne Heche, so that’s her. I mean talking about whom I’m never worked Martin Scorsese. His talented. Terry Guilliam is high on my list. I mean everybody who brings independent spirit, imagination and surprise is high on my list. I don’t respect people who just create a so called product.

S. Tsarouchas: What is the working style of Agnieska Holland?

Jan A.P. Kaczmarek: She is a European director working in the United States, that means that in our relationship  she gives me a lot of freedom. This is European tradition and she stays with it. Also she is a person with quite strong opinions and strong visions usually so that always helps , because even if you disagree if the opposing point is very clear than there is a chance for a serious discussion. The worst case is when you deal with a director who doesn’t know, what he or she wants. These is confusing and it always leads to unpleasant ends.

S. Tsarouchas: Do you think that film music can save a bad movie?

Jan A. P. Kaczmarek: Definitely yes. I mean fortunately, if a movie is really good, there is enough power behind it and money to replace the score